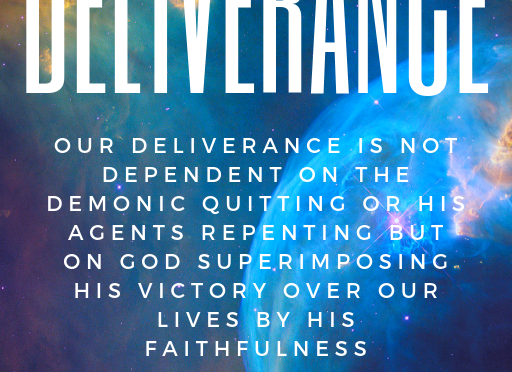 The challenge of today’s christian is the ever intensifying warfare between good and evil and the deception to fight the war that was won or continuosly make declarations to the devil as if to beg him to let go. Many times christians are confronted with the reality-on-the-ground of demonic activity versus their covenantal rights so declared and prophesied. Sometimes misfortune is so apparent and so confusing e.g all girls in the family divorced, never married or single mothers; all girls in the family married but no children or in abusive or unhappy marriages; all boys not married; all boys not successful in life etc. With such traits, even outsiders begin to raise eye-brows much to the discomfort of a christian caught up in this. Worsestill, sometimes myths and beliefs accompany such occurences e.g in this part of the world, when girls are not getting married, the prophet or seer seldomly ever goes without pointing a finger at one paternal aunt or other. Sometimes too, there is vocal manifestations of the aunt or other relative speaking and declaring their evil so committed. How does a christian who has received such a prophecy proceed in victory, in love or in strong belief? How do they carry on in faith when faith seems to be a thing for the mouth to confess only but not the actual life to be experienced? How does one bring balance to their world in which while reaching out for good, evil abounds, while in pursuit of love, hate follows them as if to swallow them and while reaching out for faith, fear of the unknown makes it impossible to walk in what they think they believe even when they declare that they do?

It is no secret that the demonic knows the rules of the spirit and that the rod of the wicked is just a negative emotion away. There’s a thin line between love and hate so much that sometimes when people are walking in hate, they are not aware because they have been schooled to walk in love, declare love all the time and so believe they are in love-mode. The thin line between love and hate has basically extended to other tenets of life e.g fear and faith, good and evil, belief and unbelief. I mean, people can become so religious that only their actions will prove which part of the coin they actually belong too concerning these. There is a breed of christians that are so religious that it takes one good provocation to bring out their true colours and meanwhile they themselves are so trained in religiouness that they are not aware of their level of ‘unreligiousness’ which is unfortunately apparent. Sadly, in the subtle sin of self-righteousness, one may never know the negative emotions they harbour. Most times too, people only ever manifest their evil too far from their christian colleagues that those acts may never be associated with them. These are the challenges that make the gospel seem like it doesn’t work and people are seen chasing one deliverance ministry to the next in confusion and sometimes even dabbling in the occult without full knowledge of what they are doing. God specifically mentions how his people are pushed into captivity because they lack knowledge (Isaiah 5:13). This same captivity has given birth to a breed of prophets/christians that are false, seers, diviners and seducing spirits as the people of God itch for a word or other that could set them free.

This is where deliverance comes in. It has become a hot topic in christian circles today. This has become a carefully designed strategy of the enemy to get the people of God intangled in religious acts that have nothing to do with God! This way, the devil’s agenda is furthered right in the confines of the church. A look at biblical text shows that deliverance was an act of God in which he sent a deliverer everytime his people cried unto him. In everycase the background of these cries for help were birthed out of hardship and challenges of various degrees. Most times too these challenges could be traced back to times of disobedience and idolatry. According to scripture, the last deliverer to be sent was Jesus himself;

And in this way all Israel will be saved, as it is written,
“The Deliverer will come from Zion,
he will banish ungodliness from Jacob”;
“and this will be my covenant with them
when I take away their sins.”

God foreknew that mankind would sin and ordained a plan for redemption at the foundation of the world. This final plan means that no flesh can redeem an individual from evil except for the Lord Jesus who before he gave up the ghost on the cross declared, “It is finished!” (John 19:28-30). The governing rules are that christians are sojourners in this world, seated in heavenly places in Christ and ruling with him.

Now, the challenge for most individuals in the body of Christ however is adopting the newlife. It is no easy thing changing in a world where certain rules apply to get things done. Few have been able to comprehend the idea of newness and the putting on ‘new clothes’ after being born again. Unfortunately, without new clothes or infact the right clothes that are fit for the ‘wedding’ they are called to, most christians find themselves being thrown into outer darkness (parable of the wedding feast- Matthew 22:1-14). The suggestion put forward in this parable is quite straighforward. The experience of being invited to a feast and then being cast out into darkness speaks of a life in which access is denied and there’s no vision or knowledge of where one is going. When one cannot see where they are going, they either knock their head on anything from walls to trees and then ofcourse falling every now and then. Clearly this is a life of confusion and as such despair can lead one to cryout for deliverance. Sadly this is the state of affairs for many christians and some have quit the walk because of spiritual confusion and conflict.

One thought on “Demystifying Deliverance Part 1: Background to The concept of deliverance”

This site uses Akismet to reduce spam. Learn how your comment data is processed.

falling is not the problem, failing to rise up is…riseUpconqueror!!!!

Day 1:Introducing Self deliverance and innerhealing